Let’s talk 80’s Halloween costumes, shall we?  As a kid I had lots of them.  I guess I just told you how old I am.  But…  You don’t know if I was born in the 70’s or the 80’s so…  *wink*   Yesterday on the Facebook page I mentioned that I had made my kid’s Halloween costumes one year.  The making of the Halloween costumes was actually 2 years ago to be exact.  As proof I even posted this picture on the page: 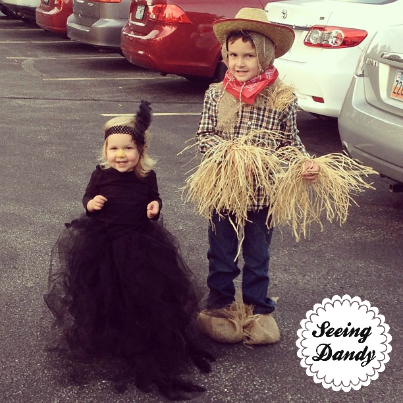 My little scarecrow and crow.  It might not look like a lot of work but it took me forever.  I don’t think that I will be making costumes again for a while… The story behind the scarecrow and the crow costumes:  Our boy was in kindergarten and wanted to be something scary for Halloween.  Only his scary was very different than everyone else’s scary.  He was nervous about being something truly frightening because he found that scary himself!  At the same time he wanted to scare everyone.  So he decided to go in a scarecrow costume so that he could “scare” people.  I mean that is what scarecrows are supposed to do to crows so the boy wasn’t too far off.  I decided that it would be cute if the little gal was a crow.  That was kind of a fail because she wasn’t scared at all of the scarecrow.  This resulted in tears as big brother became frustrated that his little sis would not run away from him all afraid.  So we had a crow who wasn’t scared in the slightest of the scarecrow. Fun times. This desire to make my kid’s Halloween costumes came from my own childhood.  From the 80’s Halloween costumes that my mom used to make my brother and I.  My mom is very creative.  I only wish that I had half the talent that she does.

Here’s the fan favorite 80’s Halloween costumes from my childhood: 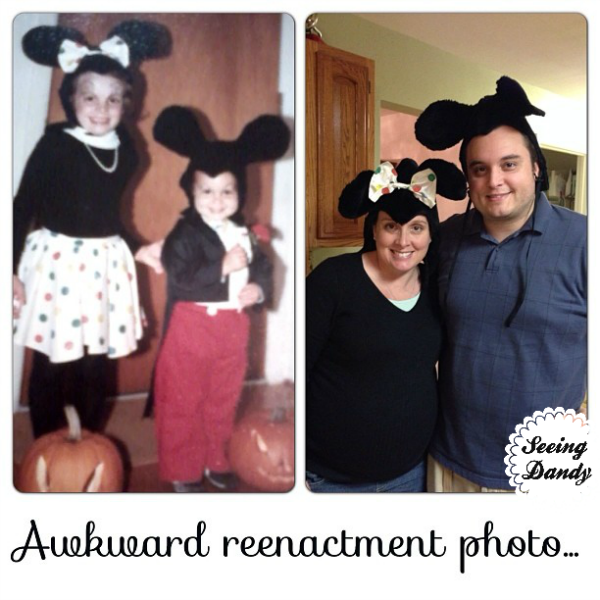 My mom made those complete costumes.  See?  Told you she’s creative.

My brother and I were the hit of the neighborhood

It’s where our love of the mouse began.

What 80’s Halloween costumes did you wear???

Stay tuned for more of my 80’s Halloween costumes if I decide to share.  *wink*